“Portland is a restless, creative city that does things like put restaurants in pink houses and music studios and bars in old revival churches; where we pursue the religion of warm people, food, and drink, as well as refuge from rainy days, lest the water cleanse our imaginations too thoroughly.” ~ Chris Kruell

This project is all about YOU. Your task is simple. We ask citizens like you from all walks of life to submit a story (a paragraph to a page in length) describing ONE aspect of Portland that you love, or that makes it interesting or unique to you. Topics could be: a detail of your favorite neighborhood, a person who epitomizes Portland, an iconic beverage, a restaurant, a historical reflection, or a particular event. Be sure to focus in on one topic rather than give an overview with many ideas. We are looking for a wide range of submissions that capture many different aspects of the city in this place in time—funny, smart, touching, trendy, etc. Your submission may also include an image—a photograph, art piece, or anything that illustrates your text submission. Be bold. Be creative. Be Weird. After all, you are a Portlander.

Thanks to all who attended our successful Design Week Portland event celebrating Portland’s design history. On October 7th, 2014, we honored Byron Ferris, Bennet Norrbo, and Charles Politz, three men whose careers overlapped, who influenced each other and yet left their mark in distinctly different ways. They worked to develop some of Portland’s biggest brands like Jantzen and Pendleton — defining the city’s stake in outdoor and athletic wear.

The 1960s design scene in Portland had some things that may seem familiar to designers today: passionate creatives, a small community, and a collaborative work ethic. Out of this creative pool emerged Byron Ferris, Bennet Norrbo, and Charles Politz, three men whose careers overlapped, who influenced each other and yet left their mark in distinctly different ways. They worked to develop some of Portland’s biggest brands like Jantzen and Pendleton — defining the city’s stake in outdoor and athletic wear.

While Portland’s Mad Men may have had a few things in common with their fictionalized NYC counterparts, their differences are more stark. According to Joan Campf, colleague of Charles Politz, the Portland creative community was more united and there was no ego. She relates that professionals in the field were honored to be doing the work they were at the national or local level. Carol Ferris, wife of Byron, writes, “Being a designer in the Northwest required grit and insistence.” Joe Erceg, colleague of Bennet and Charles relates that there was one main independent studio in the 1960s, “Studio 1030 was right across the street from Powell’s Books (Fez Ballroom) and I rented a room there and there were illustrators, re-touchers, and Dick Wylie was there (illustrator of Dick & Jane books) and he would hire us to do modeling. In there also was Tad Putman who did furniture illustration, Bennet Norrbo and Mark Norrander. That studio ran for several years before people moved on. It was there that these guys became very good at their craft.”

What made Portland’s Mad Men so great?

Byron, Charles and Bennet were artists, illustrators, curators, critics, and collectors in their own right. As Byron Ferris writes in his 1966 book, Fell’s Guide to Commercial Art, “The first commercial artists, just a few generations ago, were recruited from the ranks of fine artists. Easel painters produced pictures to glamorize products, and sign painters did imaginative lettering.” Byron’s artistic talent was expressed at a young age as he formed the “Korny Kartoon Klub” at Jefferson High School in 1939. All men produced fine art simultaneously with commercial work, and with equal pride. Byron once said of Charles Politz, he liked “that a designer could also be a gallery artist of note. He simply loved all art and ignored the barrier of thought which separates gallery art from art for use.” Charles was known for figurative drawing, developing his own technique using a stick, ink, and quick gestures. Bennet devoted himself fully to fine art in his later years, creating striking paintings under his own name, AND his alter-ego — Joe Hat.

“My three general aims are these: to be thorn in the side of the avant grade, to be a champion of the rights of you middle classes, and last and certainly not least, to be society’s darling,” writes Bennet Norrbo. This quote hints at Bennet’s conflicting ideas of what it is to be an artist and his playful and rebellious style. Marilyn Murdoch, his longtime friend and executor says Bennet was at the same time crude, sensitive and hilarious.

Charles Politz expressed his ideas and sharp wit through his yearly New Year’s card which he produced every year for 6 decades. “S.Claus, the A-Bomb, & I hope to see you around for yet another Very Merry Xmas,” he writes in 1945. Byron’s writing while also witty, was more academic as it related to design. Byron wrote and spoke about the work of Portland designers nationally putting Northwest design on the map through Communication Arts magazine and the Aspen Design Conference.

While all men traveled and lived other places, they called Portland home for the greatest part of their lives. They engaged with the community in different ways. Bennet (who stayed single), preferred Portland’s “seedy” establishments to domestic life. That scene inspired his painting and writings. He once wrote and published a pamphlet that told a ridiculously fictional history of Pittock Mansion complete with comic illustrations of monster attacks and Roman ruins (yes, he was a zinester!).

Logo design for Portland Opera by Thomas Lincoln. Originally we wrongly attributed this design to Charles Politz & Byron Ferris. Politz and Ferris later designed marketing materials for Portland Opera, but did not create this logo.

Charles thought critically about the changes in Portland and wrote a satirical article for The Oregonian on the East/West Portland divide. He was also chosen as designer and curator of the Oregon Centennial photography exhibition. Byron wrote a regular column called Design Sense for the magazine of The Oregonian and Charles and Byron together tackled branding projects for Pioneer Square, Portland Opera and the Cultural District.

They were all deeply ensconced in Portland’s culture at times celebrating it, and at times rebelling against it. Joe Erceg says, the creatives in Portland didn’t really compare themselves to New York City’s advertising scene, “We knew where the big league was, we were in the minor leagues. It was fine because that was the level that the business was, but that didn’t mean we didn’t do good work.”

Join Our Portland Story and Design Week Portland as we dive deeper into the work and lives of these three influential men.

Before the swoosh there was the Jantzen Diving Girl. Against the backdrop of political unrest, women’s liberation, and the sexual revolution, a new creative industry began to rise in post-war era Portland. Advertising agencies and commercial artists worked with local brands such as Jantzen, Reed College and Pendleton to lay the groundwork of the design profession for generations of creatives to come.

Remembered for their talent, impact, and community involvement across decades of work, we will honor and learn about three late, great Portland designers and artists of this era:
Byron Ferris, Bennet Norrbo, and Charles Politz.

Byron Ferris
Byron Ferris was a Portland native who founded Design Council, Inc. in the 60s, a full-service design firm with regional and national clients. He was a frequent presenter at Aspen and ICOGRADA design conferences, and was an Associate Editor of Communication Arts magazine, where he helped to define the emerging field of graphic design during the “golden age of advertising.”

Bennet Norrbo
Bennet was educated at San Francisco Museum Art School and worked as a commercial artist in Portland for 15 years creating ads for premier brands like Jantzen, Georgia Pacific, and Port of Portland. Setting aside his design career, he became a popular (though rogue) artist working with many mediums: clay, wood, metal, paint, film animation, and comics.

Charles Politz
Charles began his career under the name Politz, O’Gogerty & Raskolnikov, though he was just a lone designer, freelancing from his mother’s basement. From those humble beginnings grew a varied career. Charles wrote The Oregonian’s first typographic standards for computer-generated type, visually defined the Park Blocks’ “Cultural District”, and designed a best-selling book about Mount St. Helens in the year of eruption.

Learn the story of these men, their accomplishments, their struggles, and their impact on the local design scene from their close friends and colleagues. Browse a display of old sketchbooks, pamphlets, illustrations, comics, process documents and finished pieces. The evening will close with a panel Q&A.

We hope this event will serve to honor these men, and bring alive our region’s creative heritage.

Thanks to all who joined us in February for our Volume 2 book launch party! Special thanks to Michael Buchino and Yvonne Perez Emerson for snapping these LOVEly photos.
View full set on Flickr.

Our Portland Story Volume 2 has finally arrived, and we want to honor this creative collaboration with a book launch party!

The event will feature readings from 10 of the 77 authors who contributed and a social hour with drinks, music and lots of book browsing. Swap books with your fellow citizens of Portland and write yearbook-style messages. Meet the contributors of the project and exchange ideas for future story submissions.

Posted in Events, News | Leave a comment
Tweets by @PortlandStory 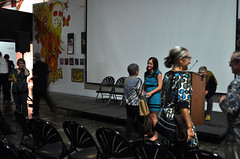 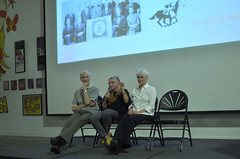 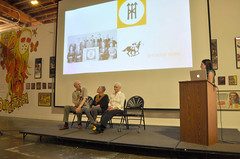 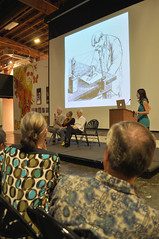